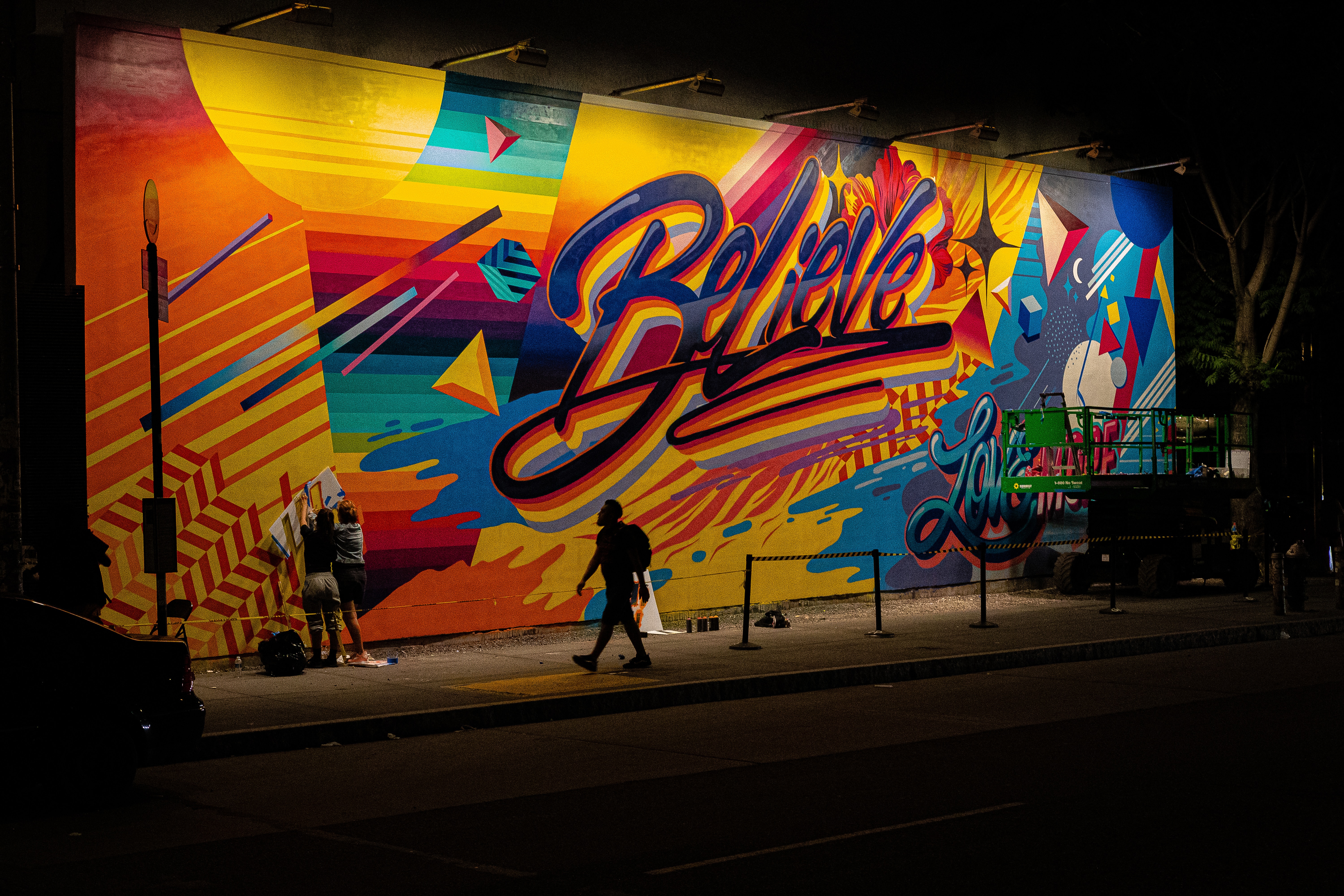 By Steven 25th November 2019 No Comments

Self-Belief is one of these qualities that most people say they want at some stage in their life.

“If only I could have rock solid self-belief, I’d be able to move mountains. I’d be able to do the things I deep down want to do without fear or self-doubt.”

Interestingly, when people have a strong sense of self-belief the reality of it tends to be quite different from the fantasy.

It often conjures up images of self-help gurus pumping their chests, shouting positive affirmations, and telling you to, “Break through your barriers NOW!!”

From experience though, rarely is self-belief so intense.

In fact, if someone is expending too much effort telling themselves that they believe in themselves then they probably don’t. There’s still some work to do.

Proper self-belief is much more matter-of-fact. It’s a lot more boring to the eye.

When you believe in yourself you don’t have to shout it from the rafters: you just simply know it. You allow it to be conveyed through your behaviour.

Self-Belief is also not something that you either have or don’t have. It’s like a spectrum that can decrease or increase.

Depending on our state of mind, and the situation we are in, it can vary.

Sometimes we believe strongly in ourselves and life just flows, whereas other times we lose sight of our value and life can feel like we’re pushing a giant snowball up a hill.

So of course, you may be asking, “If self-belief is a variable, how do we increase it deliberately, rather than just leaving it down to chance?”

If increasing self-belief is something you’d like to work on then here’s 4 steps that I believe will make a big difference.

Step 1: Recognise that self-belief is not a thing, it’s a process.

The first thing that’s important to realise is that self-belief is not a thing. You can’t purchase a lump of it on Amazon and then upload it to your brain when it arrives the next day.

We often talk about as if it’s a thing, but it’s not: it’s a collections of opinions and feelings we have about ourselves, based on our interpretation of past experiences, that we then label “self-belief”.

Whenever we turn an intricate process like this into a concept, it becomes rigid inside our mind. It stops becoming something fluid, and malleable, and becomes static and fixed.

This is a potentially dangerous mind-set as people often then read between the lines and start believing that self-belief is entirely inherent – it’s not something that we can cultivate, it’s something that is pre-decided and therefore unchangeable.

When you appreciate that self-belief is something you are continuously creating and cultivating though, it becomes something you can add to. You can learn how the process works and master it.

In difficult times when we stop trusting our own abilities, we can feel secure in the knowledge that it’s not necessarily something that we have “lost”: it’s more a case that we have just temporarily lost sight of how the inner mechanics of the process works. And from there we can make adjustments to re-connect with it.

It may sound like I’m contradicting myself here but sometimes not believing in yourself is necessary – and, in fact, a good thing.

If you find yourself in a new situation that requires you to learn then it’s perfectly natural, and healthy, to lack self-belief.

For example, if you were learning to become an airline pilot, you wouldn’t want to stride in on the first day, dripping with self-belief, and start demanding to fly a jumbo jet.

In this instance, because you haven’t yet acquired the required skill and experience, it’s dangerous to believe that you can do something you clearly can’t.

In this instance, doubting yourself is a good thing, and can actually be seen as a resource.

You do, of course, still want to believe in your ability to learn, over time, to fly a plane, but to doubt yourself in the beginning is normal and healthy.

Over time, as you train and develop the skill-set, you’ll find your sense of self-belief increasing. You’re engaged in the process of increasing your level of belief because of the time and effort you’re putting in.

Many people think that you have to believe in yourself fully all the time. And if you don’t then it’s a problem.

But this is a trap. It’s not healthy to fully believe in ourselves all the time because certain situations require us to self-doubt.

In order to expand our minds and bodies we have to put ourselves into unknown situations. And by doing this it’s going to trigger feelings of being out-of-our-depth.

We might struggle for a while before balance is restored, but this struggle is an essential part of the learning process.

No struggle, no development.

So it’s vital to appreciate that you don’t have to fully believe in yourself all the time. In fact, if you do, maybe that means you’re not challenging yourself enough.

Or maybe it means you’re kidding yourself on. Self-belief without competence can be a dangerous thing.

Doubting yourself – while at times can be debilitating – is a sign that you need to push past the struggle and learn something new. To expand your world and become someone better.

When people think that they have to believe in themselves all the time it can lead to a downward spiral.

When they – inevitably – enter a situation that is new and different, that triggers some self-doubt, they can’t handle it. They start to treat self-doubt as some kind of unwelcome parasite that needs to be exterminated and it can start viewing it as a psychological issue.

When the reality is that it’s just an indication that they need to learn a new ability, updated an existing one, or gain some relevant experience.

So don’t fall into the self-belief trap.

You don’t have to have it all the time, and your inner sense of it should be linked to your experience and ability.

Step 3. Realise you have more evidence than you think.

In order to believe something we usually have to have evidence to back it up.

Human belief is a complex topic but, to simplify things, it usually starts off with an “idea”, and we then gather evidence that backs up this idea.

As the evidence starts to stack up, and becomes more compelling, we start to believe.

Eventually, there’s enough compelling evidence that we become convinced. The idea then turns into a belief and slips into our unconsious, making up part of our personality.

When it comes to “self-belief”, the example that’s often cited is when Roger Bannister broke the 4-minute mile.

Up until that point, no-one had managed the feat, and the general consensus was that it was impossible.

However, in the 6 months after Bannister accomplished it many more runners followed suit – and in the current day, it’s now considered the standard for an elite runner.

Well, the short and simple explanation is that Bannister provided irrefutable evidence that it was possible, which then caused other runners to believe.

By believing, the athletes tapped into an inner and outer resourcefulness they didn’t realise they had, making it possible for them to achieve something that was previously thought to be impossible.

This has now become an overused example of the power of belief, but it’s still a revealing one.

When we have compelling enough evidence it can lead to the creation & strengthening of a belief, which in turn, leads to us becoming more resourceful.

When it comes to our own self-belief, we often think we don’t have enough evidence to believe in ourselves, but this is mostly never the case.

Our mind can play tricks on us, causing us to delete many of the good things we’ve done and achieved.

We can often be far too modest when it comes to assessing our talents, skills and past successes.

When we take the time to fully acknowledge them though, it can help us reconnect with our own abilities and potential, creating a solid sense of self-belief.

To do this, I’d recommend the following powerful exercise. It’s a little “fill in the blank” game that involves some inner reflection.

When you’re doing this, it’s important not to do it logically. It’s not an analytical exercise.

Just pose the question – either out loud or inside your mind – allow it to affect your internal experience and feelings, and then notice what answers naturally present themselves.

It’s like you are “sensing” or “feeling” the answer.

By going through this exercise, you’re reconnecting with the evidence that you’ve most likely taken for granted.

And, as we’ve talked about, evidence leads to belief.

Give it a go now and see what happens.

Step 4. Create your own Trophy room

I remember reading that golfer Tiger Woods has a room in his house where he keeps all his trophies.

To him, they’re not just pieces of gold and silver: they’re reminders of his past triumphs and achievements.

Apparently, before a big tournament he used to go into the room and spend some time re-living each of his successes, one by one, using the trophies as triggers of the memories.

By the time he walked onto the golf course, he brimmed full of self-belief because he just re-lived many of his pinnacle moments.

I don’t know whether the story was true or not but I like it. And I think we should all have our own trophy room.

It doesn’t even have to be an actual room, and you don’t even need to collect trophies. You can use a scrapbook, a journal, or even just your imagination.

Whatever your method of choice, it can be tremendously powerful to make a list, in chronological order, of your past successes and achievements.

You can start anywhere, but one method is to start from secondary school, making your way up to the present day.

Once you’ve made a list – you want to get between 7 and 10 successes – spend some time re-living each of them in your imagination.

Start off with the first on your list, and then make your way up, chronologically, to the present.

By the time you’re finished you’ll be feeling like Tiger Woods when walked onto the first tee in his heyday. You’ll be positively brimming with self-belief.

Do it now. Take some time with it and I’m sure you’ll find it a wonderful, self-belief strengthening exercise.

So that’s 4 steps you can take to help you with create a more solid and sustainable sense of self-belief.

It’s a large and complex subject, but hopefully these tips will help you get started.

Who knows, maybe they’ll lead to you breaking your own 4-minute mile.